Finns have always appreciated the maker of a good brew. Being called a maker of weak coffee is a serious offence that points out both the lack of skill and stinginess in the coffee maker. Finns really drink coffee a lot, 50 million kilograms a year, 5–6 cups a day per person. The market is dominated by a few big names, the coffee is of good quality yet personality is hard to find.

In the little town of Helsinki small-time coffee professionals are one big family. Samuli Parkkinen talks about doing things together. 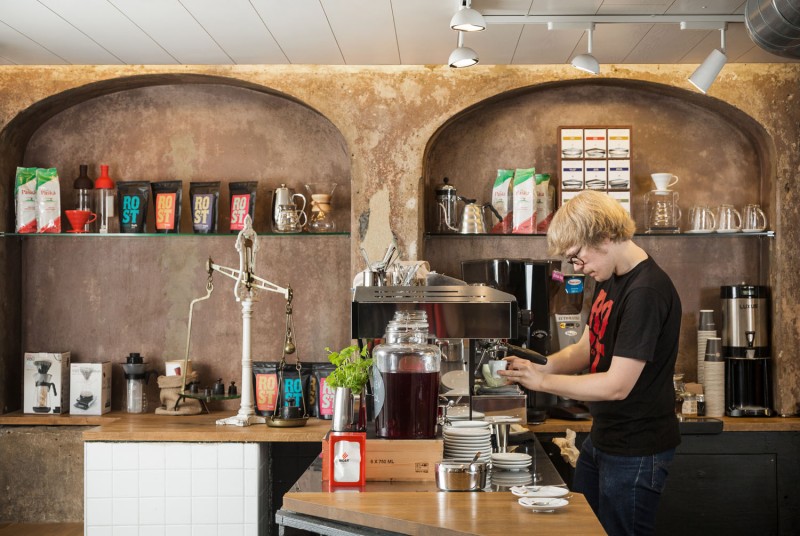 The third coffee wave hit Helsinki hard, which is more of a natural development rather than a surprise. Some people just want more.

The third wave was recognised at the beginning of the 21st century. It was preceded by the first wave in the beginning of the 20th century when coffee became more common. Quantity was still more important than quality. The second wave brought in the coffee chains and taught everyone to quaff espresso, caffe latte and other specialised coffees. The third wave, however, is purely about coffee and its quality. Whether the coffee is a blend of several origins, a single origin coffee or even a single estate coffee, it can be traced back to the grower.

—Appreciating coffee is the big thing. The whole chain from the estate to the berries, the roasting, extraction and finally the café shows in the appreciation, describes Samuli Parkkinen. A home barista with credentials and a frequent visitor to coffee shops, he ended up working in Kaffecentral around six years ago. Today Samuli is seldom behind the bar as he concentrates on the essence of coffee at the Rost & Co. Roastery.

—I take part in product development and selection, I look for the right coffees, develop roasting and sometimes pack coffees, he says. Because we are in the 2010s a good coffee is not simply valued by its taste even though the effect of other values are difficult to prove.

—A good coffee has been produced with respect to social responsibility and environmental values. A professional barista can also talk about the coffee she makes and make the whole experience smooth. The first small roasteries appeared in Helsinki just under ten years ago. Now there are about twenty roasteries of various sizes and the scent of coffee lingers around town. Mood Coffee Roastery roasts in Tattarisuo, Helsingin Kahvipaahtimo in Teurastamo, Maja in Lehtisaari, Kaffa Roastery in Punavuori and Rost & Co. in Lauttasaari. Many roasteries run their own café and a small shop for accessories.

Filter coffee is at the heart of the third wave, it can be brewed manually by extraction or by machine. Various extraction apparatuses from the AeroPress to the filter funnel and moka pots are available for far less than what is asked for a large coffee machine.

Even though we are talking about meager percentage points, signs of a coffee revolution are in the air. Helsinkians, both customers and baristas, have been quick to learn the trade. Only five years ago Helsinki was clearly the younger sister of Stockholm.

—I have to say that Helsinki is now a little ahead. There are fascinating and unique cafés in Helsinki. You can choose a café to fit your mood as there are interesting cafés all over the place, says Samuli. Today people sample coffee looking for fragrances. The light Nordic roast and filter coffee are now of interest internationally.

—The roast has to respect the bean and bring forward its fragrances. Some are berrylike, others fruity or nutty. If a coffee is roasted too dark the elements do not appear in the taste, only the roasting. A light roast, however, cannot be the sole aim, it has to support the character of the coffee as it is, Samuli says.
Samuli’s favourites are African coffees, especially Kenyan and Ethiopian ones. Black currant, jasmine, even tomato and some salty notes are among the flavours. Burundi is an up-and-coming coffee country. Next time you order a coffee ask your barista where the coffee is from and what flavours there are. If she cannot answer you you know you can get a better coffee somewhere else.

—No one should drink their coffee without knowing what it is, Samuli Parkkinen demands. 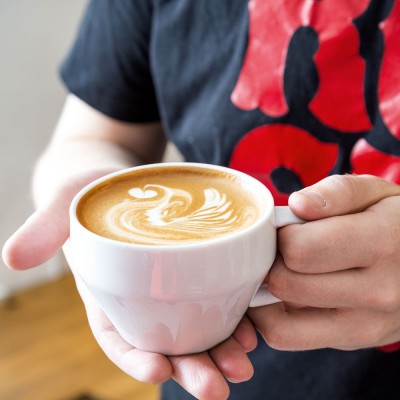 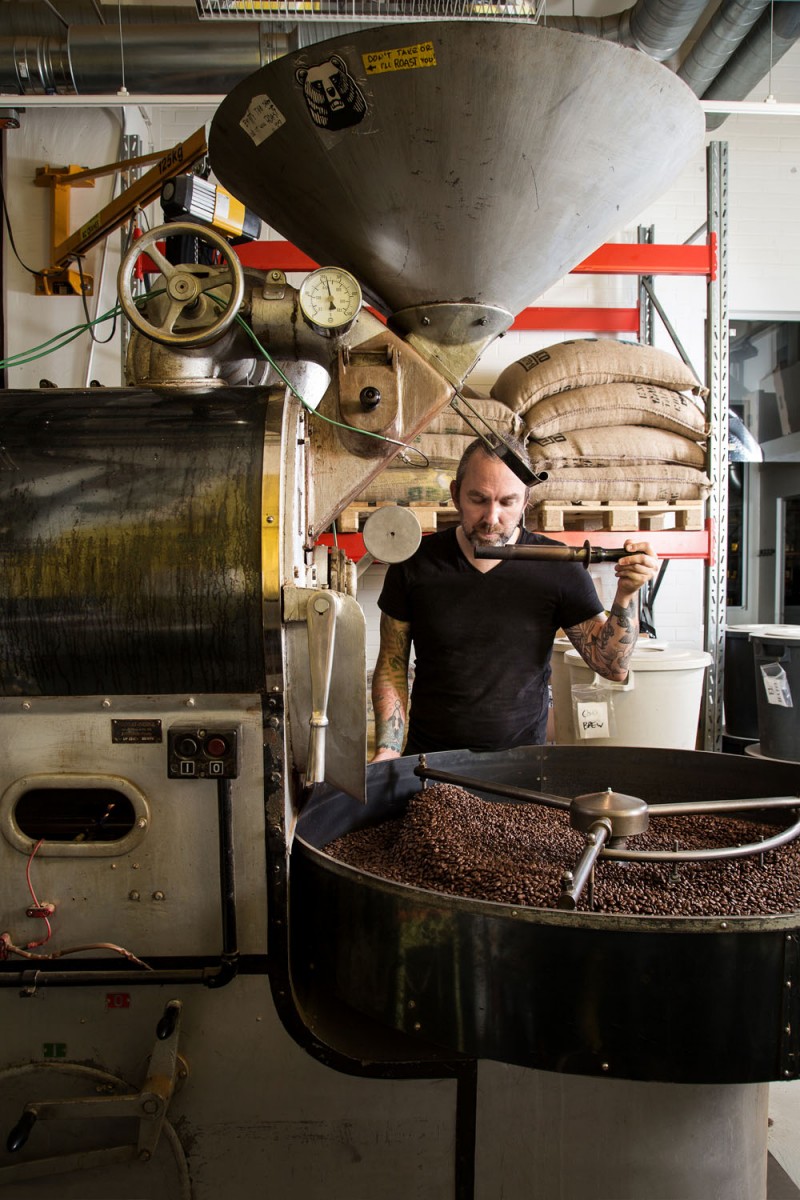 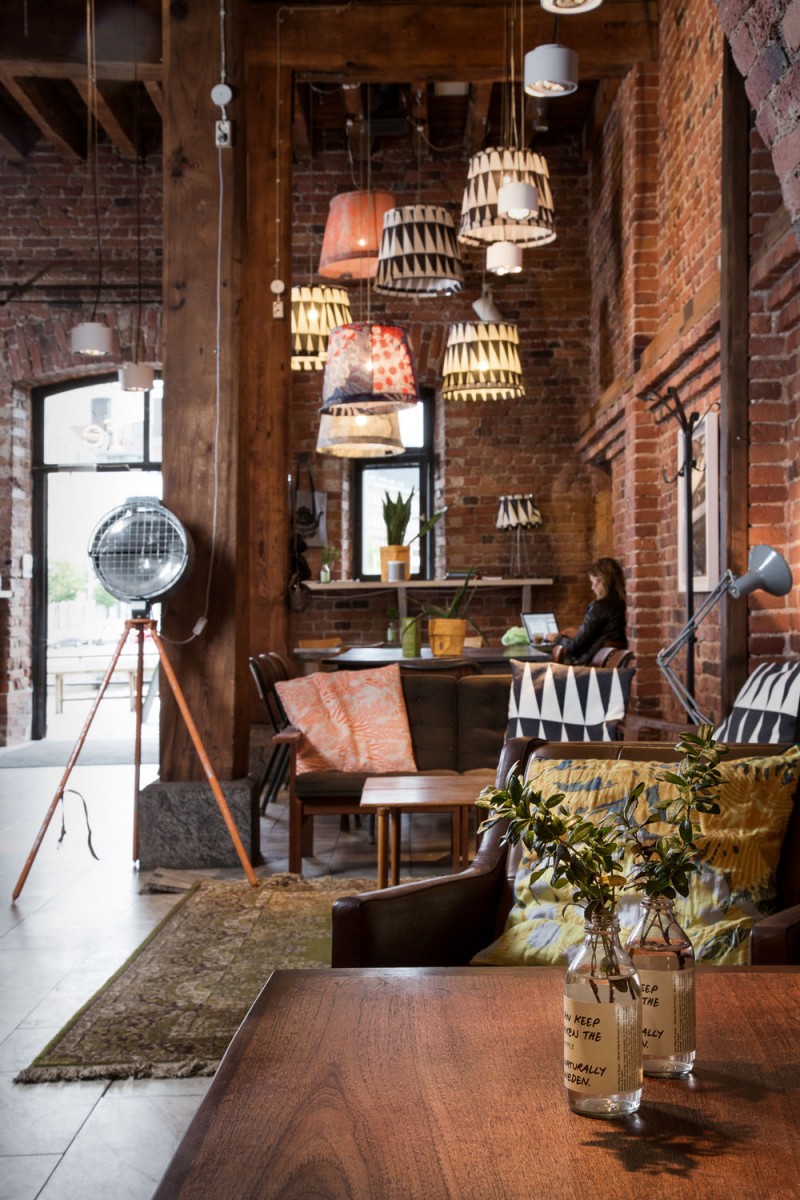 1. Alan Grosvenor knows that a nose is irreplaceable in roasting.

Johan & Nyström is Stockholm’s gift to Helsinki and Helsinkians have readily taken it as their own. Tack så mycket! (Thank you so much!) the café in Katajanokka is atmospheric and spacey.

Johan & Nyström emphasises ethical choices. The coffees are from producers who the owners know. Organic production is a given. Good coffee is backed by good values. The beans are roasted by hand in small batches. A sensible coffee enthusiast avoids Johan & Nyström’s raw cakes as they are well-known to be very addictive. However, fairly perfect.

AS FRESH AS IT GETS

Interested in drinking excellent espresso while watching it being roasted behind a glass wall? You can do exactly that in Kaffa where they roast it on the premises.

If you can’t decide what to have ask the extremely friendly staff for recommendations. One of the caficionados at the bar will be more than willing to help as well. You may also watch a fashion parade of the creative classes and media professionals.

IN BEST COFFEE WE TRUST

Kaffecentralen is the sanctum of specialty coffees. There is nothing to eat on offer apart from the small biscuit or the even smaller chocolate to enjoy with your coffee. Indeed. The coffee made by the templars is, in itself, so good, that it does not need anything else to go with.

And, as it is with all sancta sanctora, they trust in the gateway theory: from the heavenly espresso to a mind-blowing selection of coffee apparatuses that go with the addiction. A word of warning is in place. Kaffecentralen is dedicated to the coffee culture that Helsinkians are hooked on more efficiently than anyone else. At your own responsibility that is 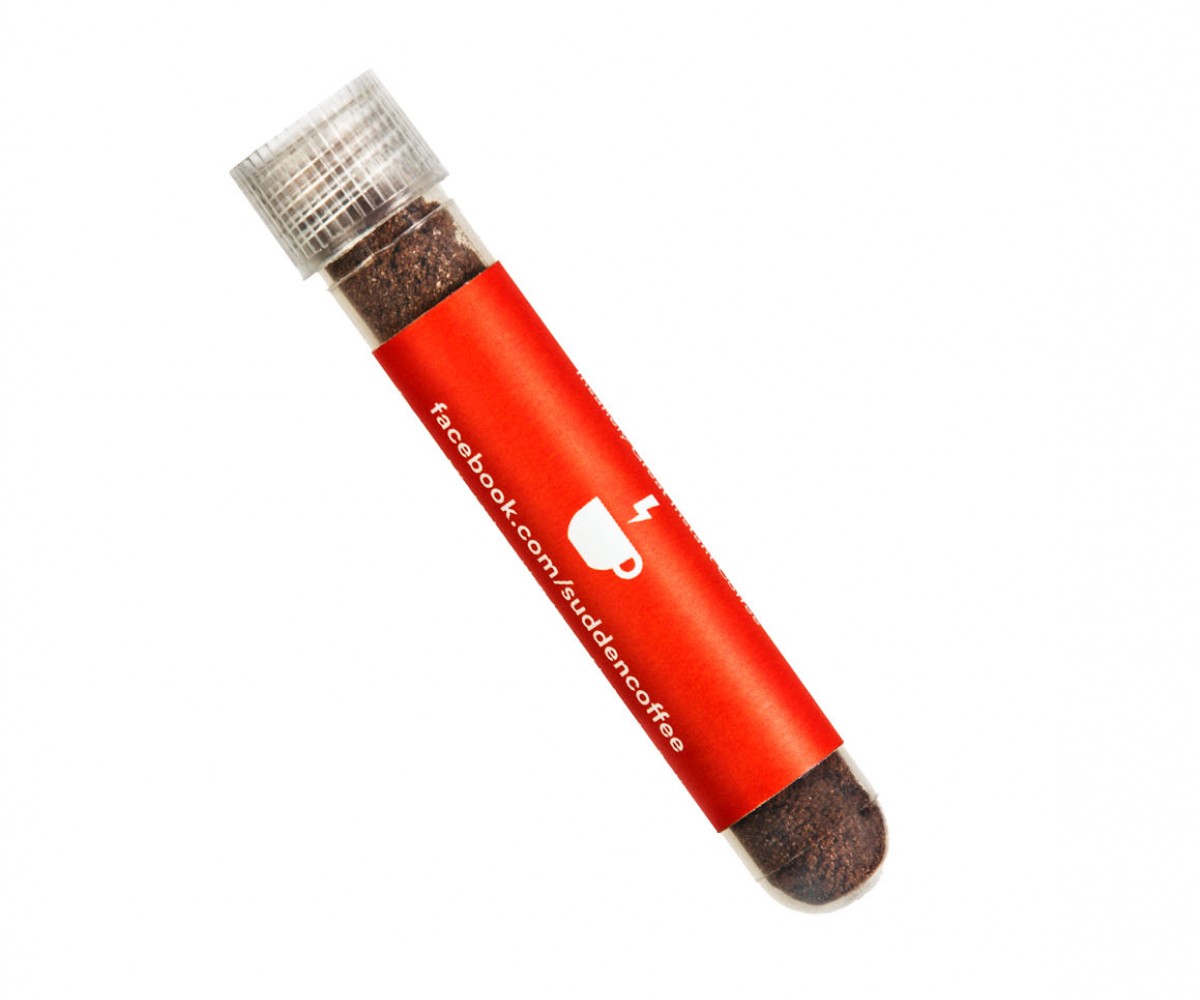 NOT QUITE YOUR USUAL INSTANT

As the 9th best barista in the world, Kalle Freese from Helsinki, closed his café and moved to San Francisco in 2015, many were surprised. Even more the surprise as Freese said he was going to concentrate on making the best instant coffee, in his garage roastery, of course.

Freese’s Sudden Coffee is an artesan instant coffee with the best single-origin beans. The coffee is made one cup at a time and frozen to powder that retains the aromas of the coffee. The powder is packed into a tube. The coffee is so clean and elegant you get all the tasty notes when you make it by simply adding water.

—Why settle for fulfilling the wishes of a hundred coffee-drinkers when you can offer something wonderful to billions, Freese has said.
The instant coffee market is gigantic, which is where Freese aims at. Financiers also think that he has a good shot there. 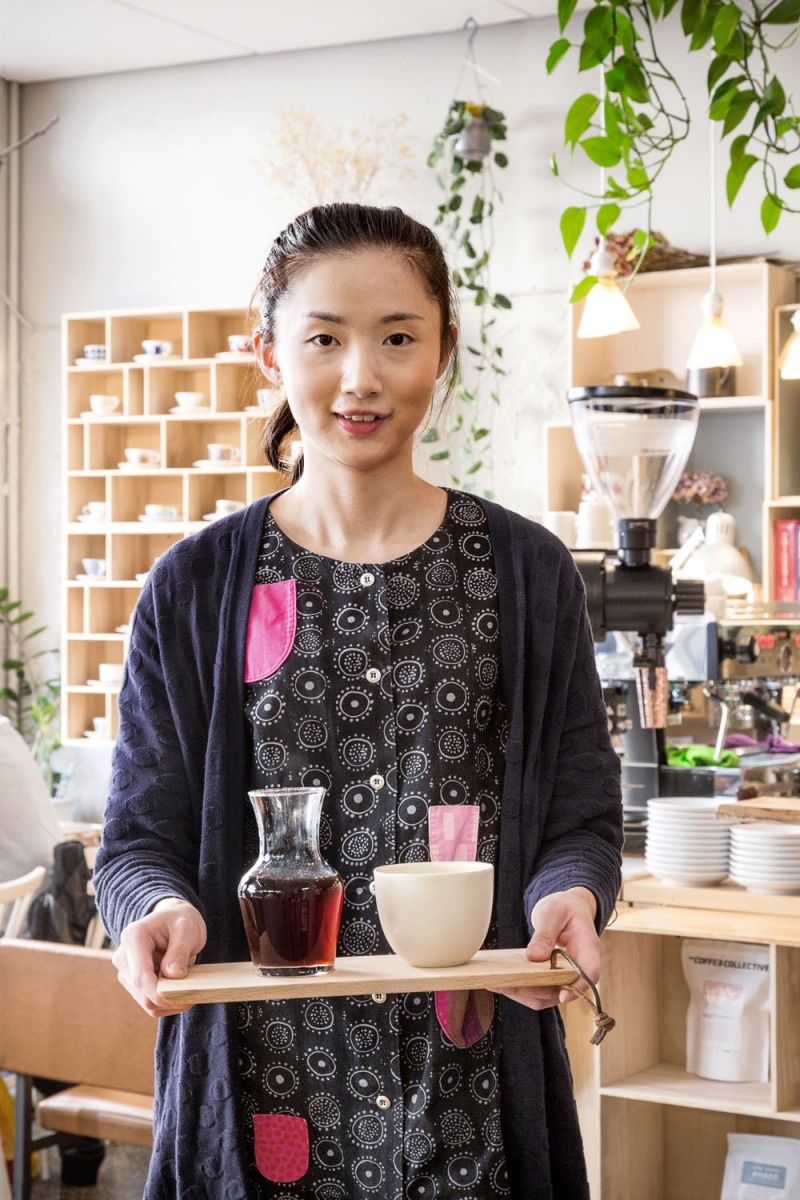 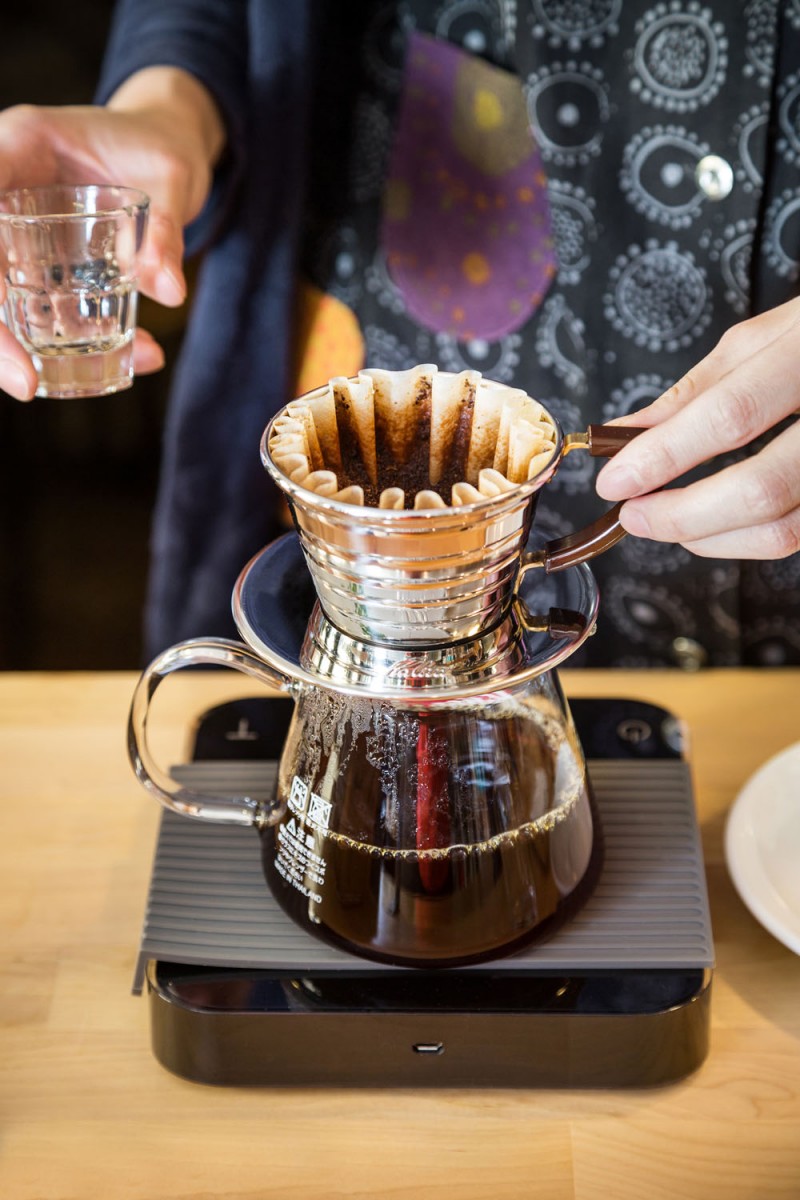 It is difficult to say whether the relaxed atmosphere or the coffee lead the way in Andante. Perhaps the coffee, after all, made with affection by Nikko Liu and Mia Yuan Fang. Even the most well-known Punavuori coffee diva would quaff a double espresso here.

Nikko Liu and Mia Yuan Fang came to Finland to study but very quickly became excited by coffee so much that they wanted to found a café of their own. And once you open a café you get to decide what it looks like. Nikko Liu and Mia Yuan Fang were enthralled by Helsinki vintage: small faux-leather comfy chairs, low thin-legged coffee tables and old school chairs. A part of the furniture has been made Nikko Liu, because he can and it’s so much fun.

La Torrefazione is one the most popular coffee spots in town. Lively. Bubbly. Bustly. And what else is there to lively and bubbly whilst bustling than finding a more current café concept?

Top baristas make the coffee state-of-the-art. All edibles are made to order, the warm and the cold.

The recipe for success has borne a brother, Fratello is only a couple of streets down the street and now they are ready take on the whole of Finland. The barricades against bulk coffee are on the streets of Oulu and next up is Espoo. Join the revolution!