Oh, you bold, Finnish nature! The most wonderful of inspirations! Hvitträsk was built to house creativity and talent.

As National Romanticism was bursting aflame at the turn of the 20th century artists yearned to the untamed wildernesses and virgin forests; as long as they weren’t too far from the pleasures of Helsinki.

The clear-water Lake Vitträsk in Kirkkonummi was just the spot for a wilderness studio. The young yet already famous architects Herman Geselius, Armas Lindgren and Eliel Saarinen bought the lot in 1901 and built a two-part manor house and a smaller building, the Lilla Villan, to accompany it.

Eliel and Mathilda Saarinen moved in to the south wing of the main building in Hvitträsk, while Armas Lindgren with his
family lived in the north wing and the bachelor Herman Gesellius and his sister, the sculptor Loja settled in Lilla Villan.

This was their intention but fate took another turn: Mathilda Saarinen and Herman Gesellius found each other, as did Loja Gesellius and Eliel Saarinen. After two divorces and two new marriages the artists lived happily together in Hvitträsk for around a decade.

In 1923 Eliel Saarinen received an invitation to design the Cranbrook Academy of Art and the family moved to the United States. Loja, Elias and especially Eero made great careers in their new homeland.

Eero Saarinen is most often remembered for the Gateway Arch and the TWA terminal at the JFK International Airport in New York. Hvitträsk remained the family’s summer residence until 1949.

Gossip or not, the charm, strength and beauty of Hvitträsk cannot be completely understood without knowledge of this humane episode. Around 16 years ago Hvitträsk was renovated and most of the original furniture by Eliel Saarinen was retrieved.

Now Hvitträsk looks again as if the architects would have popped down to thelake for a sauna bath, or perhaps they are already returning back to the house. 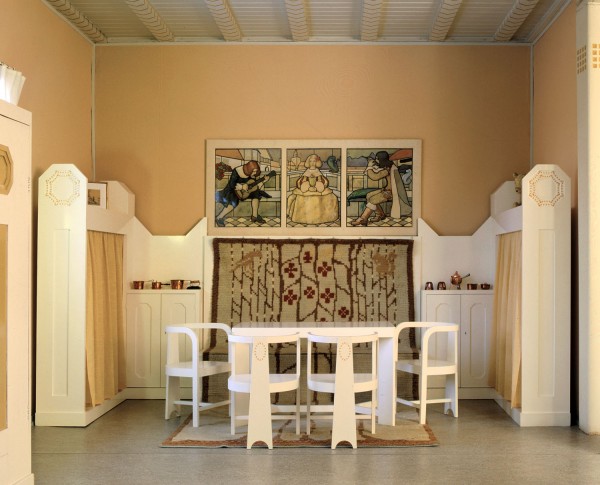 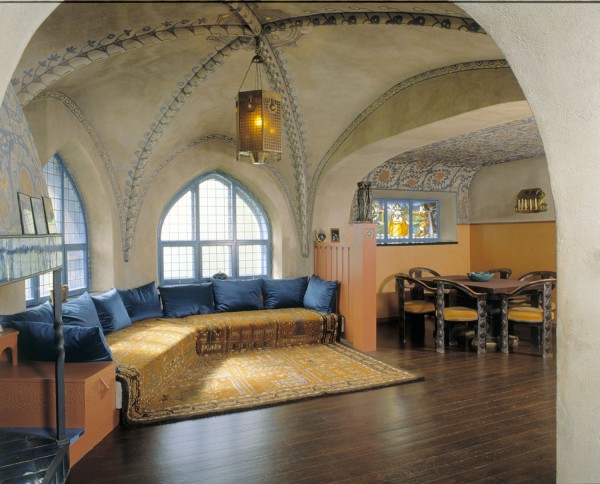 The main building’s magnificient interior is beautifully preserved. The children’s playroom on the left, Liekki (Flame) ryijy rug designed by the painter Akseli Gallen-Kallela, and the dining room.